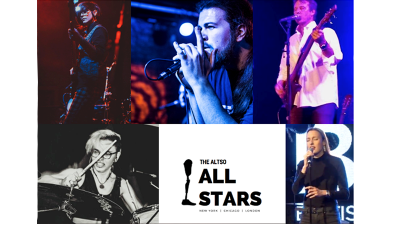 Ray McKenzie has worked for ICE, Morgan Stanley and CME Group in his finance career, and formed the ALTSO All Stars in 2016 as an international group of musicians to perform and raise donations for A Leg To Stand On. McKenzie has played in bands since he was 12, and ALTSO All-Stars will be playing Rocktoberfest London on June 6th. McKenzie spoke to AlphaWeek’s Greg Winterton about his band, what the attendees can expect, and why ALTSO.

GW: Hi Ray – thanks for taking the time today. You formed ALTSO All-Stars specifically to support ALTSO. What’s the genesis of your involvement with the organisation?

RM: Hi Greg, thanks for having me. I believe I first heard of ALTSO in 2006 when I was working on the sales desk at Morgan Stanley. I love playing music and when I heard ALTSO had bands from the financial services community perform I wanted in! But once I learned more about the ALTSO mission and how great the team was in helping so many children around the world I became very passionate about helping the organization – and as many children - as I can. To me, that is the most important reason to be involved. ALTSO has since become a passion and my number 1 charitable cause.

GW: Tell us about the band and what songs the folks who attend Rocktoberfest London can expect to hear.

RM: Our band, the ALTSO All Stars, is becoming a global collective. I try to find musicians in each city who are just as passionate about the cause as I am, and who are willing to do what it takes to raise as much money as possible for ALTSO, with the knowledge that we will be helping hundreds of new children by performing in a big rock show. For the London edition of Rocktoberfest, I reached out to some fellow Apple employees, as I knew that the musicians who play in my ALTSO All Stars band in New York couldn’t make the trip. We have organized a great band with some really wonderful people. We are choosing some songs by the Clash, Amy Winehouse and a few American bands as well. I would rather not say the titles so as to keep an element of surprise, but rest assured we will rock the night!

GW: What are ALTSO All-Star’s hopes for the London event from a fundraising perspective?

GW: Finally, Ray, tell us what it is about ALTSO’s mission that resonates with you and your bandmates.

RM: The fact that we can help impact the lives of so many children in such a major way is so rewarding. Helping give a child mobility, especially a young person in a family that has little in the way of resources and money, is life changing. ALTSO’s leadership -  Gaby, AJ, Beth Ann, Meade, Hannah and Mary - are some of the most wonderful people I have ever met. Also, the ALTSO volunteers, our sponsors and the bands who perform are so fantastic to work with. I plan to work with ALTSO for the rest of my life, if they will have me.