It’s mid-November, and that means that hedge fund managers will shortly report their long public equity positions to the SEC for the quarter ending September 2021.

Goldman Sachs publishes its ‘Goldman Sachs Hedge Fund VIP Index’, which, according to the index methodology, “consists of hedge fund managers’ “Very-Important-Positions,” or the US-listed stocks whose performance is expected to influence the long portfolios of hedge funds. Those stocks are defined as the positions that appear most frequently among the top 10 long equity holdings within the portfolios of fundamentally-driven hedge fund managers.”

Goldman Sachs also has an ETF that tracks this index, The Goldman Sachs Hedge Fund Industry VIP ETF, so this week we wanted to see how it’s doing ahead of the new data that will be coming out in the next couple of weeks.

The result is interesting, and performance of the ETF appears to be split into two distinct parts - prior to March 2020, when the world’s markets experienced a large and sudden drawdown at the outbreak of the COVID-19 pandemic and related lock-downs, and immediately after it. 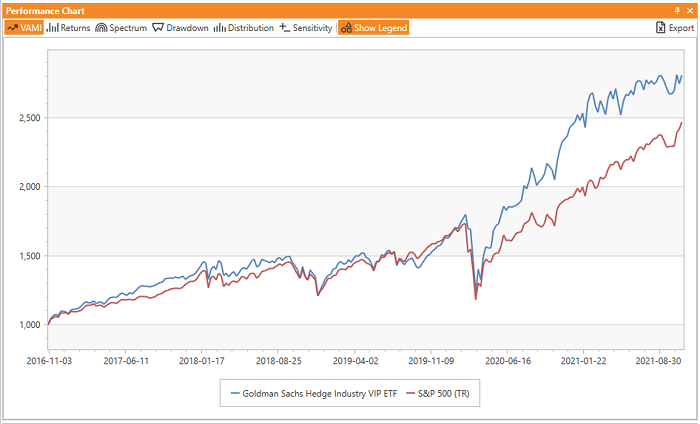 Prior to the drawdown, the ETF did not really do much different from the general market index. It was a little better at times and sometimes a little worse, but those fluctuations basically washed each other out resulting in some steady oscillations around the general market. However, something changed going into April 2020 when the EFT literally exploded, and continued to outperform U.S. equities through mid-2021 (and that is on top of already strong equity market performance driven by global stimulus efforts). In the second half of 2021, the outperformance appeared to have exhausted itself, and the ETF simply continued to ride on the earlier gains. 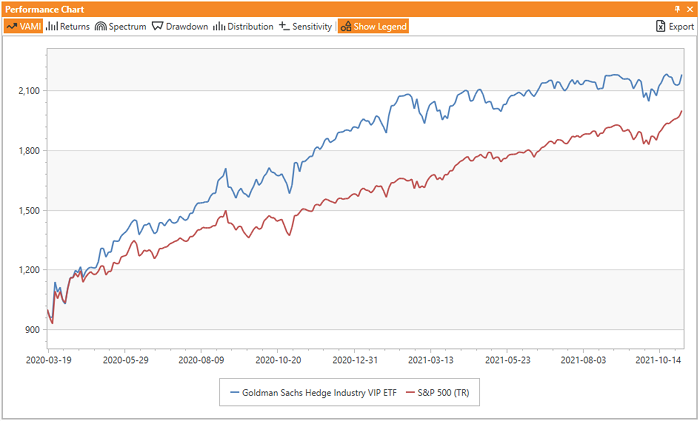 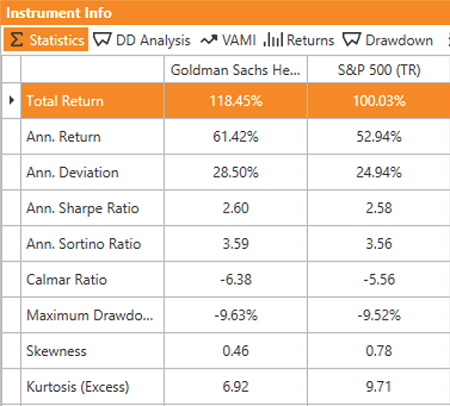 Starting from March 20, 2020 the S&P has basically doubled itself (as of the time of writing), and GS ETF has managed to put almost 20% on top of that.

The real interesting question is whether this product will be able to continue to consistently outperform the U.S. public equity market going forward, or whether this was a one time “lucky guess”. Referring to publications and sources analyzing the 13-F filings by hedge funds (the source of the top equity position information) can help inquiring readers to answer that question and decide if they want to play the 13-F game or simply hold an equity index. In any case, good luck, and we’ll be keeping an eye on this to see if performance does normalise or whether the Goldman ETF - and, indirectly, the hedge funds - can maintain the current gap.

Dmitri Alexeev is Founder and CEO of AlphaBot, a collaborative platform for alternative investment research

The views expressed in this article are those of the author, and do not necessarily reflect the views of AlphaWeek or its publisher, The Sortino Group Ltd.