So, it happened. Last week, the U.S. Federal Reserve cut interest rates for the first time in a decade, reducing the target range for the federal funds rate to 2 - 2.25%. This action was taken “In light of the implications of global developments for the economic outlook as well as muted inflation pressures”, it said in a press release.

With many industry commentators - and, clearly, the Fed - having concerns about a possible recession, this week, I figured I’d look into how hedge funds perform in a severe downturn. Hedge funds in general have been somewhat of a punching bag for much of the finance digisphere in recent years; complaints about under-performance and high fees just two of the challenges the asset class has faced amidst a decade of global central bank quantitative easing policies pushing equity prices to all time highs. What often gets overlooked by the media is the downside protection these products offer; it’s called a ‘hedge’ fund for a reason. So do they provide downside protection, and to what extent?

A look at the 2 largest economic downturns in recent memory - the global financial crisis and the bursting of the dot-com bubble - shows the extent to which hedge funds can be effective in minimising losses in a significant downturn. September 2002 saw the S&P500’s maximum drawdown at -44.73% of its total value; the drawdown lasted 74 months and didn’t end until October 2006. The Barclay Hedge Fund index had a maximum drawdown during this period of -4.32%, and recovered 11 months later in April 2003. During the Global Financial Crisis, the S&P500 was off -50.95% from its previous high in February 2009 and didn’t recover until March 2012, a drawdown lasting 53 months. Conversely, the Barclay Hedge Fund index had a drawdown of only -24.09% - less than half that of the S&P500 - and recovered 35 months later in September 2010. 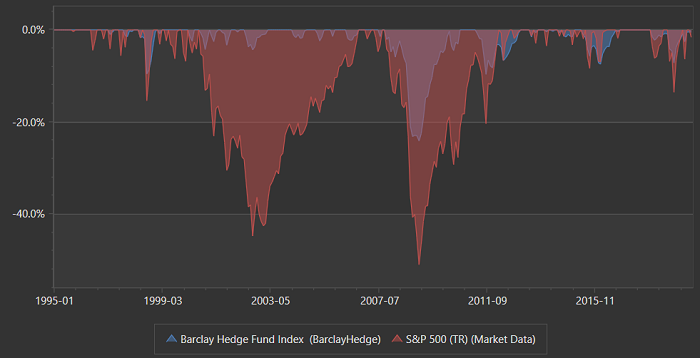 That doesn’t tell the whole story, of course. The Barclay Hedge Fund Index comprises many funds which use different strategies as the source of their returns. The beleaguered managed futures asset class has endured a rough decade, with the Barclay CTA Index - a proxy for the managed futures industry, which heavily comprises systematic, trend following trading programs - producing only 3 years of positive returns post-crisis. However, this strategy, on aggregate, generated double-digit positive returns both in 2008 when it returned 14.08% and 2002 when it was up 12.36%, providing what AlphaSimplex’s Kathryn Kaminski dubbed ‘Crisis Alpha’. 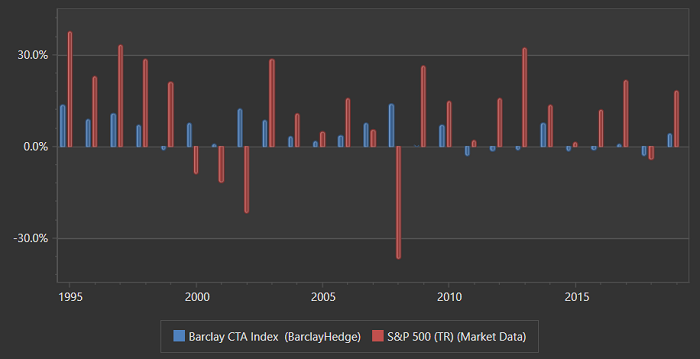 No-one wants a recession - except, Bill Maher, of course - but if one does come, and if it’s bad, then it’ll be interesting to see not only how hedge funds perform vs. the market, but also whether managed futures strategies again provide ‘crisis alpha’ and, assuming hedge funds do produce smaller losses, whether they get applauded for doing that by the same folks who chastise them for under-performing in a bull market.