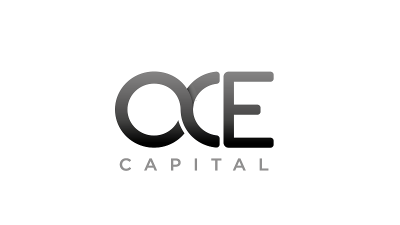 In a follow on from my inaugural post about the ‘new relationship’ in today’s current macroeconomic climate, this week I’m taking a look at how the ‘new relationship’ and macroeconomic climate has affected the multi-asset class performance during this market cycle. As a quick refresher, the ‘new relationship’ is the change of the major equity markets’ relationship to their 10-year Government Bond counterpart; specifically, how the two asset classes were very negatively correlated but have now become significantly more correlated. For example, the S&P500 and the US 10-year Bond had a high negative correlation however this has since changed to a low negative correlation. My previous post also spoke to the current 10-year yield relative to its historical average.

In order to carry out the analysis, I used the HFRI Diversified Fund of Funds Index as the proxy for performance for hedge fund multi-asset class performance. To compare, I used the S&P500 returns as a proxy for the market returns. The analysis used both proxy’s monthly returns. In terms of the performance metrics, the annualized returns were calculated, and the correlation, beta coefficient, alpha generation, Sharpe ratio and standard deviation were all analysed from January 2000 – December 2018. My analysis looks at three different time periods:

The table below shows the results; there are a number of interesting observations worth discussing about from the data.

Over the lifetime, the multi-asset funds have done what investors have hoped for; on average, they have outperformed the market with a lower volatility. This has a caveat in that the bulk of this outperformance has come from the 2000 – 2007 period and the trend over the past decade has seen significant outperformance by the market.

There was a negative performance shift that occurred during the 2008 – 2018 period. Multi-asset funds under-performed the market while nearly doubling both their correlation (72%) and increasing their beta coefficient (0.23) to the market. Every year, bar one, the multi-asset fund proxy had the same directional return as the S&P500. Importantly, the fund’s large +6.63% annual alpha generation has essentially completely evaporated down to an annual +0.10% of alpha. 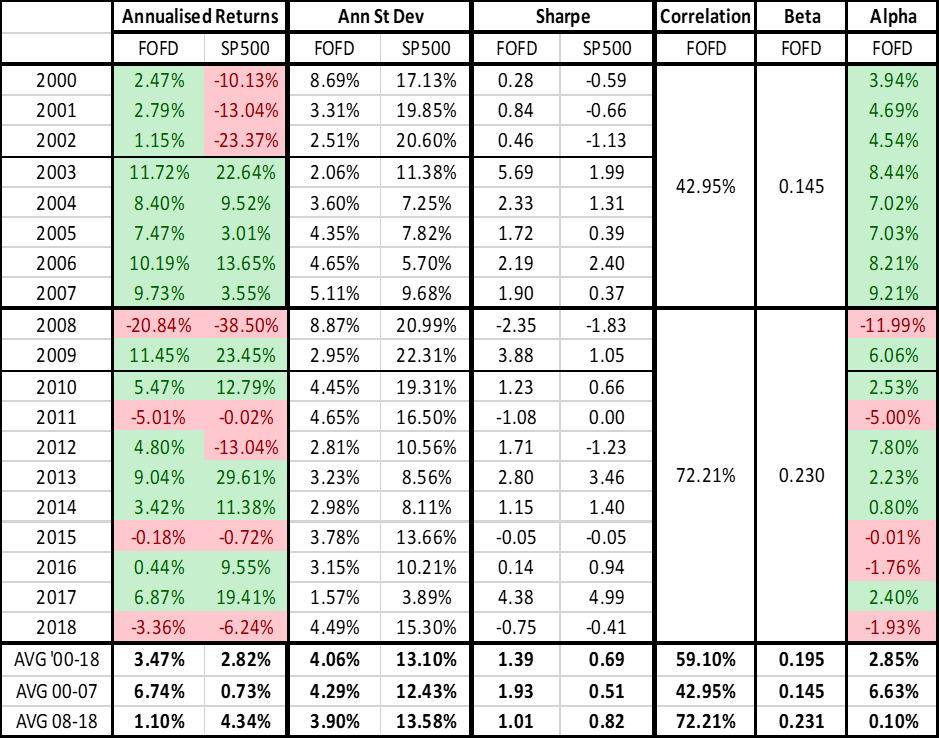 Based on the negative shift in performance over the past decade as shown above, it is no wonder investors have fallen out of favour with Fund of Hedge Funds. As an allocator/investor, I would also not be investing in the average Fund of Hedge Fund based on the above analysis. The performance shift goes against my investment philosophy - and how I developed ACE’s strategy - for hedge funds which is high alpha, low beta and diversification of an investor’s portfolio. I will go into a lot more detail on that investment philosophy in a future series.

As I don’t know what each diversified fund of funds is made up of, I cannot give definitive reasons as to why we have witnessed the changes we’ve seen. All I can do is hypothesize as to why the beta coefficient and correlation has significantly increased from a macro perspective. Some potential reasons include:

(a) The zero lower-bound monetary policy environment has created extremely low yielding bond instruments which has significantly affected the fixed-income derived returns of multi-asset managers. In order to make up for this lower/non-performing yield, managers have increased their equity exposure thus increasing correlation and beta to the S&P500.

(b) Higher volatility of the funds, relative to return level, due to the change in correlation in fixed-income and equity markets – as spoken about in my previous post. As the overall portfolio is not experiencing the same level of diversification benefit, the returns of multi-asset managers are closer aligned to the main driver within the portfolio - likely equity markets due to point (a) above.

(c) Manager/Investor pressure to create higher returns given the strong equity bull-run that fund managers are in competition with means that managers take bigger positions within the equity markets thus increasing both correlation and beta coefficient with the S&P 500.

Traditionally, investors could have allocations to equities which historically bring in high returns; however, these are also subject to steep and quick corrections. Investors were able to earn a profitable yield within the bond market while also availing of the highly desirable equity correction protection via their high negative correlation. In addition, investors were able to add a commodity portfolio which although, as a long-term investment, is cyclical instead of long-term increasing, they show a lack of correlation to the formerly mentioned markets and therefore, in terms of portfolio management, is worth holding. Lastly, investors could round out their portfolio with investment in real estate although traditionally REITs have, what I consider to be, a high positive correlation, especially during recession periods. All in all, however, this would have been a well-rounded, diversified, high returning portfolio that included equity correction protection.

If we look at those same traditional markets in today’s current macroeconomic climate, equities are in their longest ever bull-run. Within the investment arena, it is widely spoken about as the ‘most hated bull run’ due to the artificial nature of it brought by central bank monetary policy; a steep correction is widely expected. Fixed-Income, due to zero lower-bound monetary policy, is extremely low yielding. Additionally, it does not provide that equity correction protection anymore due to the loss of their high negative correlation. REITs, during the previous two recessions 2000 – 2002 and 2007- 2009, had around a 70% and 80% correlation respectively. The subprime mortgage bubble burst is widely considered to be the cause of the last recession, proving a causal positive relationship between both markets. Commodities remain cyclical in nature in the long-term with research showing the increasing relationship with equity markets since the Global Financial Crisis. All in all, a poorer performing, highly correlated portfolio with some portfolio diversification however, importantly, no equity correction protection. 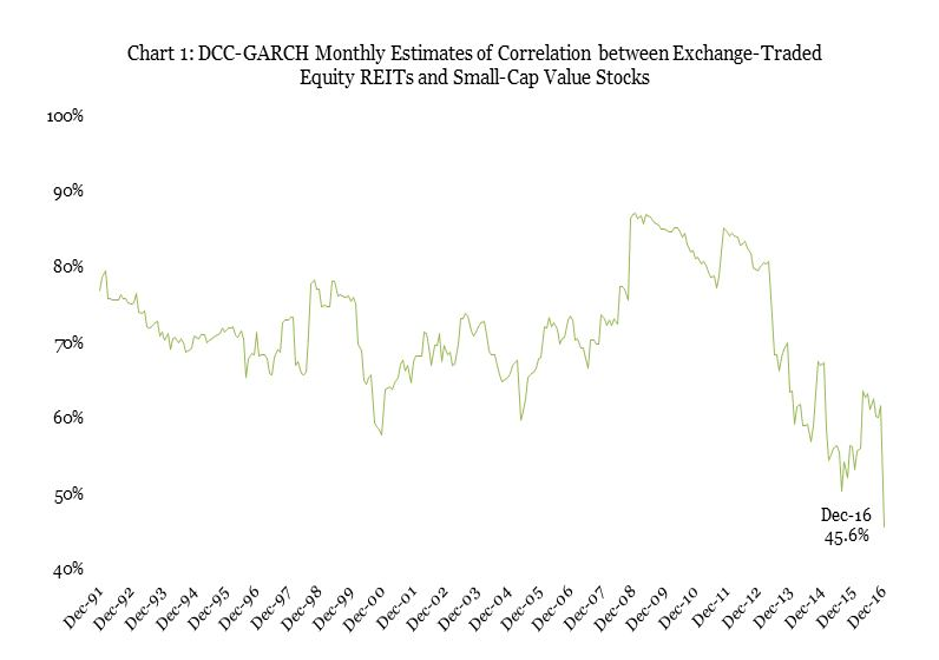 Given the current macroeconomic climate, what is my investment philosophy in terms of portfolio construction? My fear is three-fold:

To make up for the loss of the high negative correlation, especially with my degree of fear of an equity burst in the near future, I believe Family Offices and Institutional Investors need to increase the amount of their investments into more uncorrelated products, than they have traditionally, to lower the hurt that will come from an equity correction. Given how the traditional asset classes have become increasingly correlated with each other, I believe it is extremely important that investors expand into more non-traditional markets in order to find truly uncorrelated returns via different market/price drivers and return behaviours.  At a CFA event in Ireland, due to my work with hedge funds, I was asked by the keynote speaker whether or not I think hedge funds will exist in the future and whether there should be investment into them. I strongly believe that hedge funds have a very important role within an investor’s portfolio, which is one where they utilise the unique liquidity and tradeable markets characteristics of a hedge fund investment vehicle relative to their ‘cheaper’ counterparts like ETFs. The pre-agreed terms and conditions of a hedge fund vehicle, generally, require a lock-up and they can allow the ability to trade within non-traditional markets that other investment vehicles do not allow. This allows hedge funds to run strategies - and trade within markets - that are driven by different price drivers and provide portfolio diversification that the traditional asset classes and other investment vehicles cannot; the types of markets and strategies that I believe are required in today’s macroeconomic climate more than any time in history. The hedge funds utilising these types of markets and strategies I consider to be within the ‘Alternatives asset class’ - due to their lack of market exposure to the traditional asset classes; this is something I will expand on in future articles and is the bones of why I don’t consider hedge funds, in general, to be their own asset class.

Investment programs involve substantial risk, including the complete loss of principal, and no assurance can be given that the Fund’s investment objectives will be achieved. Past returns are no guarantee of future results.

None of the contents should be considered as advice or a recommendation to investors or potential investors in relation to holding, purchasing or selling securities or other financial products or instruments and does not take into account your particular investment objectives, financial situation or needs. Before acting on any information you should consider the appropriateness of the information having regard to these matters, any relevant offer document and in particular, you should seek independent financial and legal advice. Statements of opinion and recommendation will be introduced as such and generally reflect to judgement or opinion of Karl Rogers. These opinions may change at any time without written notice and ACE Capital Investments assumes no responsibility to send updates regarding any changes.

This document may not be reproduced in whole or in part, and may not be delivered to any person without the prior written consent of the author.

Any references to product(s) offered by ACE Capital Investments is not an offer to sell, or a solicitation of an offer to buy, a partnership interest in any fund described herein. No such offer or solicitation will be made prior to the delivery of the applicable offering memorandum and other materials relating to the matters mentioned herein. No representation or warranty is made by any fund or any other person (including any of its agents or other representatives) as to the accuracy or completeness of the information contained herein. Only those particular representations and warranties which may be made in definitive agreements relating to the funds, when, as and if executed, and subject to such limitations and restrictions as may be specified in such definitive agreements, shall have any legal effect.

The information contained herein was taken from financial sources that were deemed to be reliable and accurate at the time of publication. Changes in the market may cause this information to become out-dated or obsolete.

Neither Karl Rogers or ACE Capital Investments are affiliated with, or endorse, sponsor, or recommend any product or service advertised herein, unless otherwise noted.