The Impact Of Low Volatility On Global Macro

Louis Bacon was in the news recently as he closed his hedge fund Moore Capital Management to outside investors, citing low market volatility as one of the difficulties in generating good returns for his clients. It is no secret that many other hedge fund strategies have been struggling in recent years, with lagging performance often attributed to Central Banks' interventionist policies since 2008 disrupting the usual price discovery mechanisms. And while Global Macro has not been the worst performing hedge fund strategy, it still falls closer to the end of the list of larger strategies sorted by annualized return from January 2008 until October 2019.

This week I figured I'd take a look at the statistics to try and see if we can visualize what is happening in the Macro vs Volatility space. The chart below shows us pretty much everything we need to know: 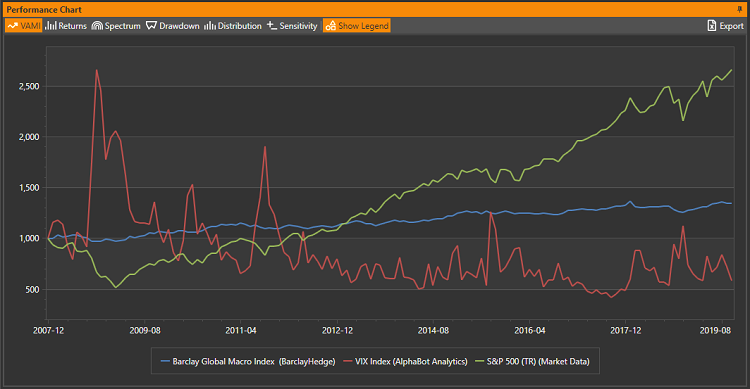 Specifically, we can see these strong effects:

And of course we know what that volatility damping force is - the QE(s) in all of their multitude of appearances. A drawdown chart makes this effect to really stand out: 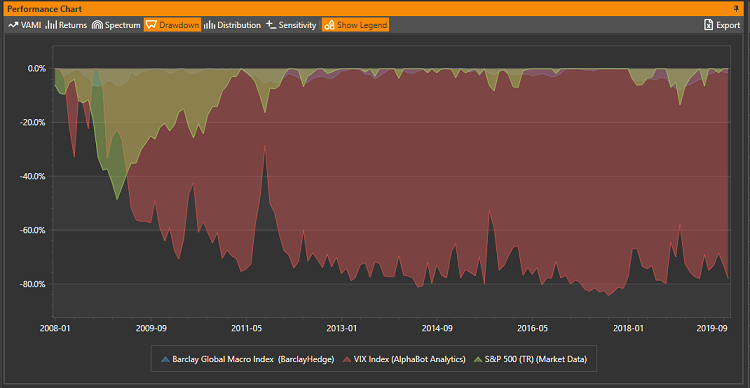 Since the peaks of 2008, the VIX has been consistently reduced by nearly a 5x factor, while at the same time, equities almost literally stopped losing money. It's amazing to see how the red and the green shapes appear to be a mirror reflections of each other. To see how this plays out for Global Macro, let’s take a look at detailed drawdown chart for the index over the same period:

2 out of the 3 largest drawdowns since 2008 in Global Macro are happening in the low VIX environment, and those periods are also the longest. The current and most severe drawdown - with a loss of more than 8% - has not yet experienced a full recovery. So what does the future hold? We will keep an eye on this sector and see if the most recent round of (“non-”) QE has a similar effect on the strategy.