Time To Buy The Dip In CTAs?

Until September, CTAs were on a tear in 2019, with the Barclay CTA index producing returns of +7.8%. In September and October, however, the industry took a hit, giving back a third of those returns (-2.6%). Does this represent an opportunity for CTA investors to buy the dip?

Looking at the quarterly returns of the Barclay CTA index to reduce the monthly noise, one can see that there is considerable mean-reversion in the CTA world, meaning that periods of very high or low returns are followed by a correction in the opposite direction. 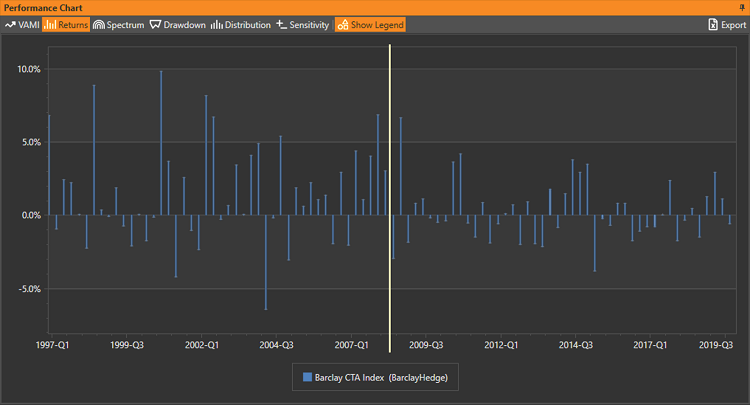 It is also easy to notice the “dampening” effect, or the smaller highs and lows in the right half of the chart vs the left. Interestingly enough, the “imaginary” yellow divide line in the middle of the chart goes through the middle of 2008; it's well documented that the post-crisis enactment of quantitative easing has been shown to impair CTA’s ability to perform (we'll dig into that topic in one of our upcoming posts).

There is a better way to see reversal (or “bouncing from the lows”) than eye-balling the returns table or chart, of course. We can export the quarterly returns from AlphaBot into Excel and then create a simple scatter plot of one quarter’s return (horizontal axis) vs the next quarter (vertical axis). The resulting chart looks quite interesting, especially if we put a regression line through it. 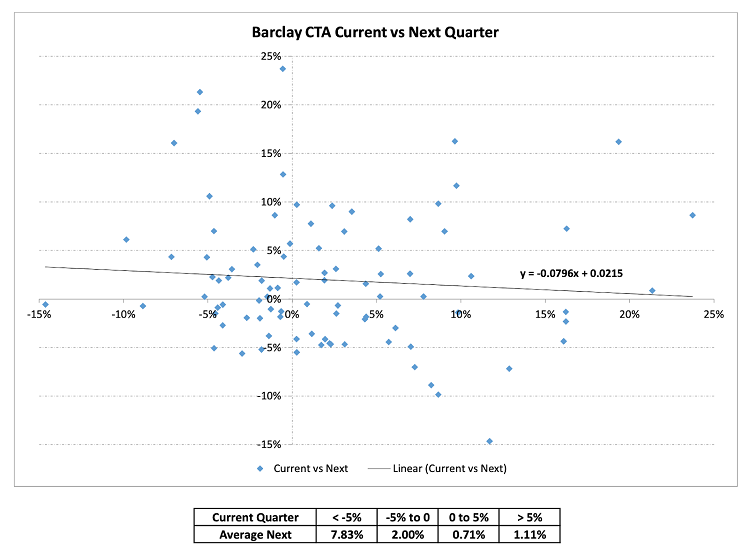 The regression equation shows the negative slope of the line of -0.0796, and that means precisely the effect we are discussing - reversal of returns. Most interesting, however, is the summary table underneath the scatter plot; it shows the average return for the next quarter when previous quarter returns fall into a particular range. Numerically, it shows that losing quarters are followed, on average, by a strong comeback; the bigger the loss, the greater the comeback.

Deriving from these historic observations, it is quite likely that the drawdown CTAs are entering in late 2019 may just be well reversed in early 2020, and we will revisit this in early 2020 to see if history repeats itself.