Trend Following CTAs Back With A Bang In 2019

Earlier in August, Societe Generale Prime Services published its July update for its family of CTA indices, and the SG Trend Index - an equal-weighted index of ten of the largest managed futures trend following programs open to new investment - is up +12.63% through the end of July, and so far in August is up another +3.52% (at the time of publishing) for a year to date gain of a spectacular +16.58%. It’s a real boon not only for these programs but for trend followers generally given the bad publicity that systematic trend following CTAs have received in recent years amid poor performance.

With this in mind, this week I wanted to look at some of the programs that comprise the SG Trend Index are doing individually in 2019, and for this, I used data from the NilssonHedge CTA database, which sources data for these programs from publicly available sources. The NilssonHedge data might not be the exact share class that is used in the SG Trend Index, but the program we use for the comparison here is the same one.

Looking at the data, Lynx Asset Management and Aspect Capital are leading the pack in 2019 with returns of 19.8% and 19.6% for the year, respectively. Indeed, each program in the SG Trend Index is now in the green for 2019, with GSA Capital’s Trend Fund producing strong returns in July to push it into positive territory with a 2.9% return for the year.

CTAs love to espouse their lack of correlation to equity markets, and these ten programs will be no different. Aspect and Lynx’s returns both exhibit medium correlations to equity markets (I’m using the S&P500 Total Return for the comparison) at 0.49 and 0.549 respectively, whilst none of the others go beyond +/- 0.3, which statisticians would tell you are all weak correlation coefficients (and a strong selling point for these CTAs as equity market instability is picking up). 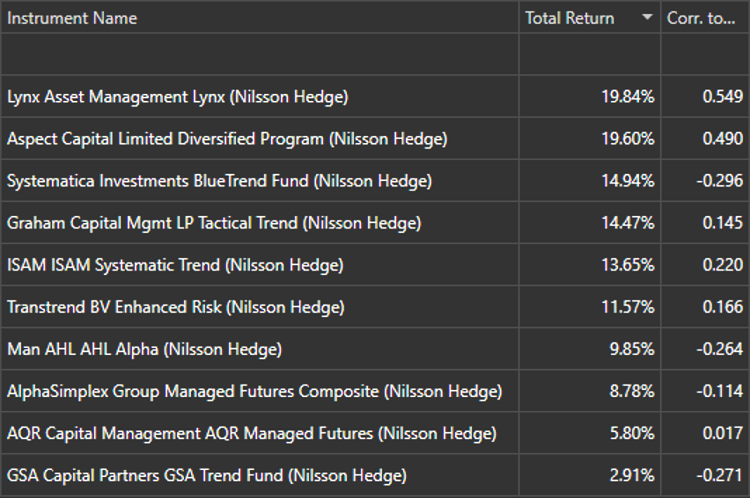 Finally, here’s some more fun for those of you statistically inclined. Notice the strong Upside Averages (average positive returns) and high Upside Frequency (proportion of positive returns) vs their Downside counterparts for most managers. This is where the impressive returns YTD are coming from - frequent and strong upside moves, a key trait of CTAs that has been considered almost lost recently. Looks like they can still do it when conditions are right.

Have a good week!