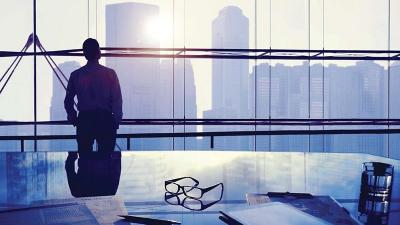 Section 457A approached the offshore fee deferral issue in two ways. First, looking forward from January 1, 2009, Section 457A provided that such deferred compensation shall be includible in gross income when there is no substantial risk of forfeiture of the rights to such compensation. Practically speaking, this provision removed the possibility of offshore deferral of income for services performed going forward from January 1, 2009.

The second element of Section 457A addressed funds that had already accumulated in such plans for services performed before January 1, 2009. A sunset provision was structured so that all such deferred compensation must be repatriated on or before December 31, 2017. For many hedge fund managers, this will cause a dramatically higher income year in 2017. This required repatriation by the end of 2017 is the element that is driving the present planning for many in the hedge fund community.

While Section 457A will require the repatriation by hedge fund managers of significant dollar amounts, it is also expected that this repatriation will encourage significant charitable giving.

Many hedge fund managers already provide critical support to numerous charities-both large and small-but with the higher income expected due to repatriation, these charities could see that support further expanded. This would be a terrific by-product of Section 457A.

Though the income experienced by some hedge fund managers may be dramatically higher, charitable planning strategies their advisors recommend are expected to remain quite simple.

In significant income years, philanthropic managers often complement their high income with a substantial charitable contribution, allowing them to support their favorite charities while taking an income tax charitable deduction. With potentially outsized income in 2017 due to repatriation, it is expected that many hedge fund managers will see this as an opportunity to be even more charitable.

Because of the high income from repatriation, the tax impact can be significant. Some hedge fund managers will choose to do nothing, either purposefully or because they don't plan ahead. For a hedge fund manager with an adjusted gross income (AGI) of $1 million who has $15 million to repatriate, doing nothing could result in more than $6 million in federal taxes.

To minimize the impact of such high taxes, three strategies to consider are:

This is a common strategy, as charitable donations can be used to reduce adjusted gross income up to 50%. Contributions can be made to an operating charity, a public charity sponsoring a donor-advised fund (DAF) or to a private foundation.

Grantmaking organizations, such as a donor-advised fund or a private foundation, can often handle more sophisticated donations beyond cash, more easily facilitate grants to a variety of charities and provide for greater long-term giving due to the potential for investment growth.

A donor-advised fund (DAF) allows a donor to make a tax-deductible charitable contribution generally equal to the amount of the cash contributed or to the fair market value of a non-cash donation. The donor can then recommend grants to qualified charities over time. The donor can also recommend how the remaining contribution is invested to potentially grow the donation tax-free over time to increase future charitable giving.

Similarly, tax-deductible contributions can be made to a private foundation and can allow for grantmaking to a number of charities over time. Private foundations may also enable greater investment flexibility for potential growth of the donation.

For this strategy, the CLAT should be set up as a grantor trust into which funds are contributed. Donating to a CLAT allows for an income tax charitable deduction at the time payment is made into the CLAT. The CLAT then pays a lead payment to one or more
designated charities over a period of years. At the end of a CLAT's term, remaining funds can go to non-charitable beneficiaries.

Importantly, since DAF sponsors are public charities, a CLAT's lead payment can go to a DAF sponsor. Increasingly CLATs are
being used in conjunction with DAFs, allowing greater flexibility in charitable giving strategies. This strategy potentially enables additional funds to be generated for charities through investment growth both within the CLAT as well as the DAF, and the use of a DAF provides additional flexibility to decide over time which charities to support.

Also, through a CLAT's investment growth, additional funds may be generated, with the ability to increase the remaining payout of the CLAT to a non-charitable remainder beneficiary like a family.

A person may attempt to avoid state or local income taxes by changing their domicile to a tax-free state, such as Florida.
However, the state where the person was previously domiciled, like New York, may contend that services were rendered while
the person lived in that state and state income taxes must still be paid to that state. For this strategy to be considered, the tax impact would have to be significant and the person would likely have been already contemplating a move. Also, while changing domicile can reduce state and local taxes, it doesn't affect federal taxes. As a result, changing domicile is a rarely used strategy. 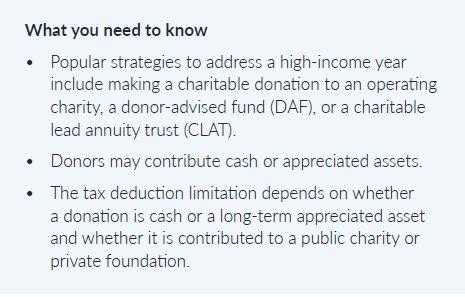 In this illustration, a hedge fund manager has an adjusted gross income of $1 million and has $15 million to repatriate by the end of 2017 due to IRC Section 457A. This results in an unusually high-income year of $16 million for this individual. Recognizing the uniqueness of this high-income year, it is important for the hedge fund manager to have a sense of urgency in deciding on the most appropriate strategy to pursue.

While every individual's circumstances vary, the same concepts apply even at different income and donation levels, such as a hedge fund manager with income of more than $500 million who has grand charitable goals. 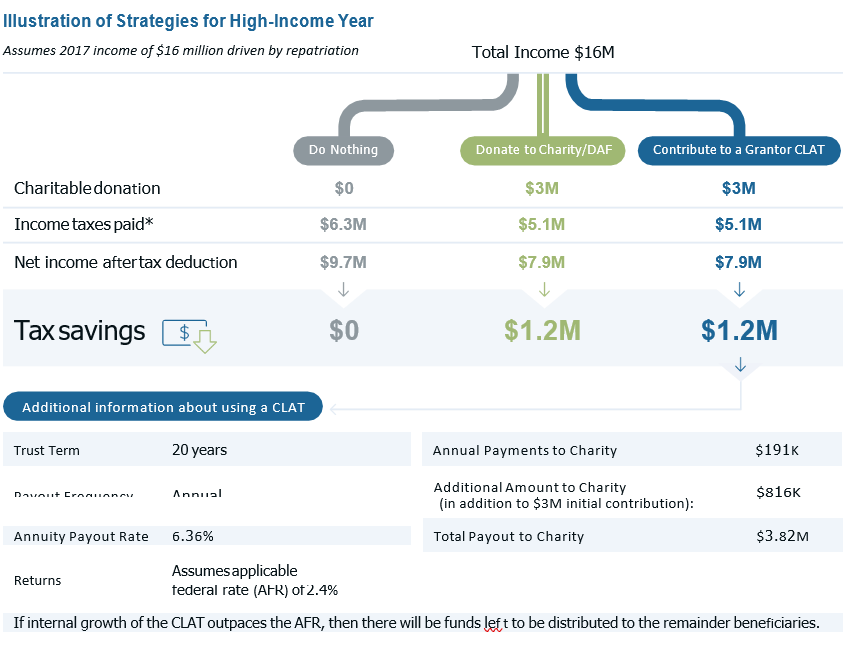 Doing nothing results in the highest net income for 2017. However, for hedge fund managers who are interested in philanthropy, this is an ideal time to develop a philanthropy strategy. Options include donating to an operating charity, donating to a DAF, or contributing to charity via a CLAT. Each option provides a way to support charities of interest at a significant level while also resulting in tax savings. In particular, a DAF allows making a decision to be charitable and receiving a tax benefit now, while having more time to decide which charities to support.

The one-time tax circumstances in 2017 provide a unique opportunity to jumpstart or accelerate charitable giving. Because of the need to finalize repatriation by the end of 2017, it is important to begin planning now to achieve the tax and philanthropic impact that is desired.

Information provided is general and educational in nature, and should not be construed as legal or tax advice. Fidelity Charitable does not provide legal or tax advice. Content provided relates to taxation at the federal level only, and availability of certain federal income tax deductions may depend on whether you itemize deductions. Rules and regulations regarding tax deductions for charitable giving vary at the state level, and laws of a specifjc state or laws relevant to a particular situation may affect the applicability, accuracy, or completeness of the information provided. Charitable contributions of capital gain property held for more than one year are usually deductible at fair market value. Deductions for capital gain property held for one year or less are usually limited to cost basis. Consult an attorney or tax advisor regarding your specifjc legal or tax situation.